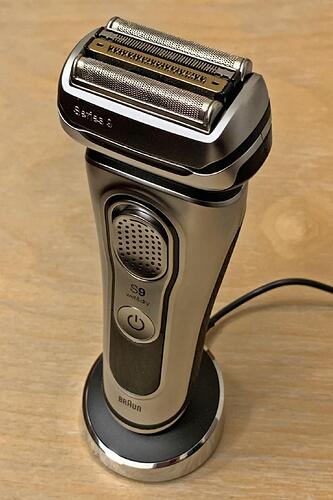 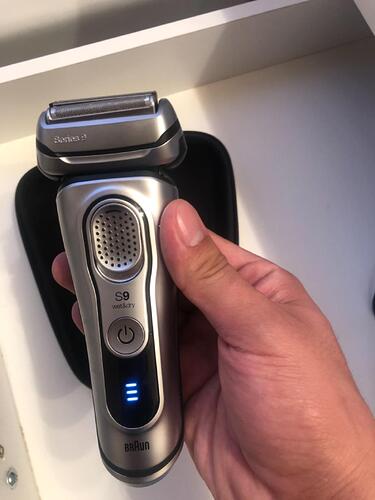 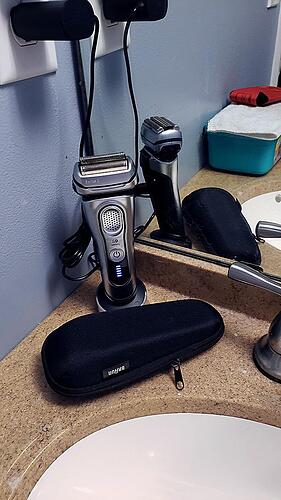 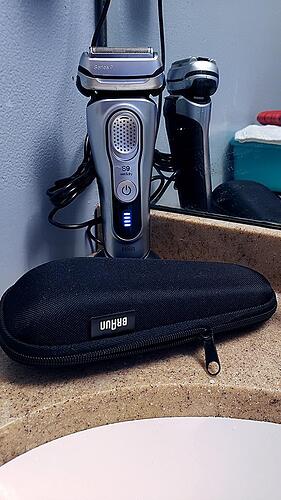 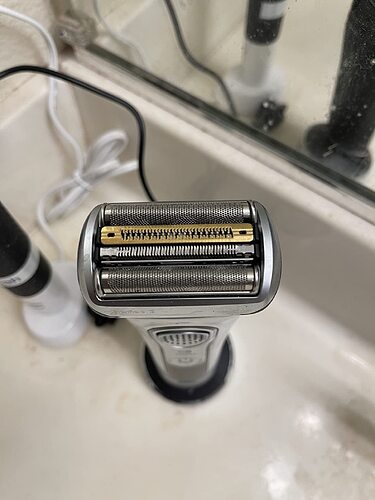 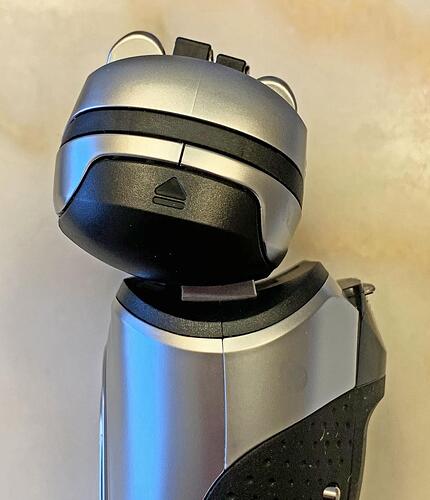 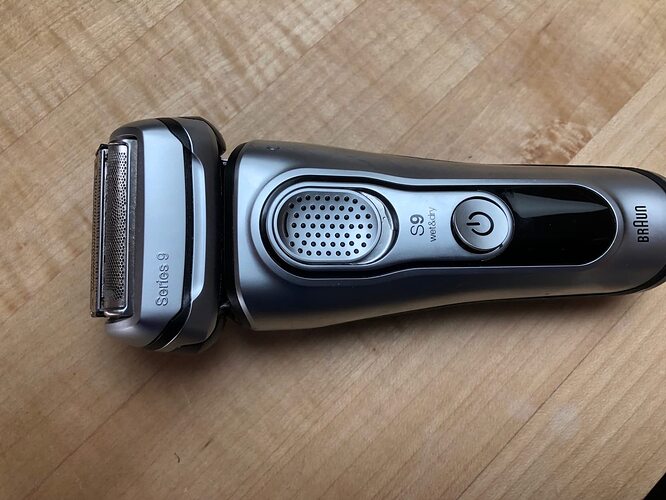 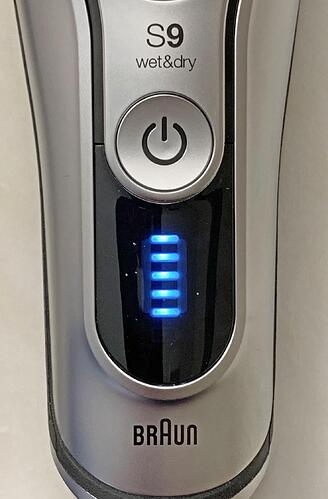 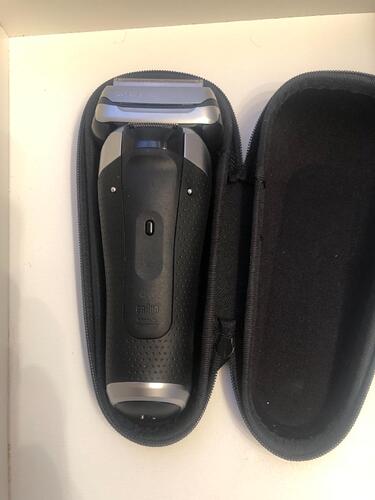 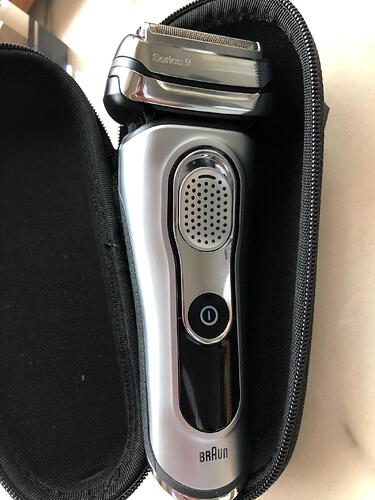 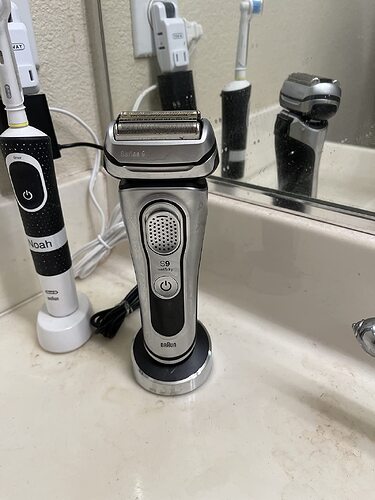 It’s touted for delivering the world’s most efficient shave and being exceptionally gentle, but will this Braun series 9 Shaver and its responsive technology perform flawlessly to justify its high price? We’re looking at the Bronze Series 9 Shaver, which Braun claims is their best electric shaver with five synchronized shaving elements.

The world’s most robust shaving technology and an intelligent auto-sensing motor to shape more hair in one stroke than any other shaver. This Braun Series 9 shavers, an Amazon Choice recommendation ranking at #2 for the category of foil shavers. It also holds a respectable 4.1 out of five-star review rating. Inside the box, you’ll find the Bronze Series 9 Shaver, including the Clean and Charge station. The cleaning fluid refill. You also receive a travel case cleaning brush and a charging cord.

As you can see, there is so much going on in the shaver head, and a lot of technology is built into this device. So we’re going to go over the features; if we take a look at the shaver head, there are five shaving elements incorporated into it. The gold trimmer and the middle are what they call the Hyperlift and basically, what that will do is it will take those flat-lined hairs, and it’ll trim those up. The silver trimmer above that is to direct cut trimmer that’ll take those hairs growing in different directions. It’ll align them and make sure we can trim those as well.

And above that, you’re going to see a straight line right in there, which is a protected skin guard that will create smooth shaving on the top and bottom. We have two options foils, which they call them, or foil shavers. You can go in there and get those more delicate hairs and smooth those out for a clean finish.

One of the unique elements of this shaver head is that it has this 10-D directional technology in it. So basically, all these five shaver elements here can move in independent directions, so if you push down on the foil, you’ll see one side pop up, or if I push down the trimmer, the other side will pop up. This is for a contour to your face in any direction as you’re going, so you have the most efficient shape possible. Another exciting feature of this Bronze Series 9 is its intelligent Sonic technology, which can perform 40,000 cross-cutting actions per minute.

It also has intelligent auto-sense technology. The motor in this can tell the thickness of your beard and adjust the power 13 times per second to ensure you have the optimal amount of energy to get through your shade. If you look on the front at the shaver head, it swivels back and forth, but once we push this down, it actually locks the shaver head, which you can adjust the shaver head. If you slowly move it, it will go up to 20 degrees and back to 10 degrees, back to zero, and then back to 10 and 20 again. If you’re trying to get on that mustache and don’t want it moving, you need to activate that locking feature. You’ll see there’s a precision trimmer that pops up. That’s good for sideburns but also for long hair.

This device also comes with an actual brush, so Brown tells you not to use the brush on the foils when you’re cleaning it. The meeting is to be used on the internal part only. To put this back on the device, you just push in again. You put the head on top, and Braun also states that you can take the head off, reverse it, and put it in either direction.

Suppose you take a look at the LCD screen on the holder. Once we hit the power button, you will see five blue bars that light up, indicating a full charge for this device. You also see a water droplet icon, which suggests it needs to be cleaned, and the Braun Series 9 will take 60 minutes for a full charge, giving you 50 minutes of use. Braun Series 9 also has a rapid charge feature where if you charge it for five minutes, you’ll be able to get one quick shave out of it.

As far as charging this Braun Series 9, there are two ways you can do it. You can plug the power directly into the device, or you could use the Clean and Charge station. Plug the charger in, then take the Braun Series 9 shaver, and there are two tiny prongs in the back. So, when you stick those into the clean and charge, it simply goes and sits back, and it will start charging. And while we have the Clean and Charge station, if you look on the back, it’s a little button, you press it, and it pops down, and that’s where going to put your cleaning fluid.

Braun Series 9 is a costly product. Looking at Amazon, the list price is around $249. I happened to catch a $50 coupon on this one, so we got about $200. I have Braun Series 9, and it can cut through a thicker beard. I want to see if this one can do the same.

It’s at a higher cost, and I would expect to do so even if it hasn’t been tested. But once we get through it, we’ll see what it does. I first started out trying to use just the shaver head and see if I could get through that thick hair, and it wasn’t really doing anything.

The precision shaver that’s on this. It did a pretty good job. I didn’t know how well this would cut, but it did a good job. I got through that thick hair, took it away, and got it down to stubble, and then we were able to go in smoothly with the shaver head and just clean it all up. So, with most foil shavers, you know you got to go over the area several times until you can clean it all up. You have to stretch the skin, get in there and keep working until you get it to where you’re feeling it, and it’s super smooth.

But this device, though, worked very efficiently. Going through my beard and just feeling it’s very smooth. It’s super smooth, so seeing that Braun tested the Series 9 on the three-day beard, you can see it was probably that stubble that I originally got down to after using the precision trimmer. Once I got down to that. Yes, this moved very efficiently and smoothly.

Nothing’s pulling at the hairs. I didn’t feel any irritation, and it was just gliding through there, and when I was on the lips, I locked it in place. So, I put it at like 0, and then I locked it in, and then it doesn’t move on you. So, if we take a look at the battery that’s left, I still have four blue bars, so we only used one blue bar up, and that was me shaving a full beard with a precision trimmer, and then going after it will probably get five shaves out of a charge of this device.

Suppose you’re going to see that little droplet indicator light up. You’re going to take the shaver, you’re going to stick it in, push it back, and then it’s going to tell you it’s going to read based on what it’s sensing and how much you need to clean this. It is on the expensive side. It was $250; that’s a lot of money to spend on a shaver or trimmer. The technology built into this should do what it says it will do flawlessly. I would say, for somebody who’s shaving every day or once. Every one to three days like they’re recommending to use this product, I think it would work great. Super smooth. It’s super-fast and super-easy. You have the cleaning station right there; it’s just the price that will come down to.

If it’s too much, you go and try something you know, a little smaller and cheaper electric shaver. It’s not going to have all the cleaning and the charging station. It’s not going to have the technology the Braun Series 9 has. It’s not going to have that flexibility, the 10 D movement or even the extra cutters on here, the smoothness, but it’s going to be a lower price, and the cost of buying the Braun Series 9 everything comes in the box. You want to be aware of some extra costs that will be down the line as far as the shaver head here that comes off. They recommend that every 18 months, you replace the shaver head. In addition to that, the cleaning liquid last 21 cycles, which is equal to about 21 shaves, and if you’re shaving every day, you’re going to be probably buying one of these each month. However, you can run it manually underwater.

I clean it yourself, so there’s a small saving there, but if you’re buying the Braun Series 9, you’ll want the cleaning charge station you’re going to want to be using it. You want to ensure you’re getting the utmost efficiency out of your product, and you need to clean it properly. So just be aware of all those costs.

Overall, the Braun Series 9 is a great shaver. I got the job done, worked efficiently, and even worked through my thick beard with the precision trimmer.