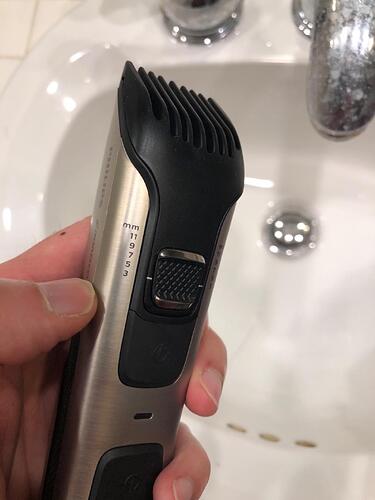 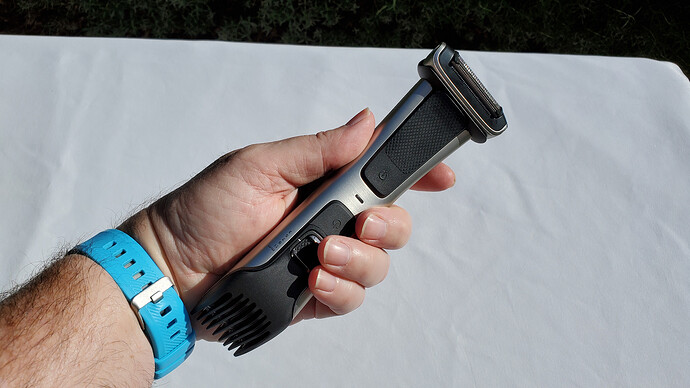 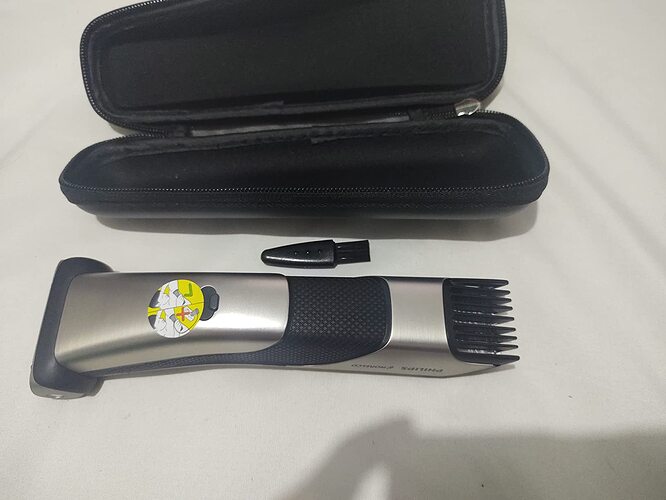 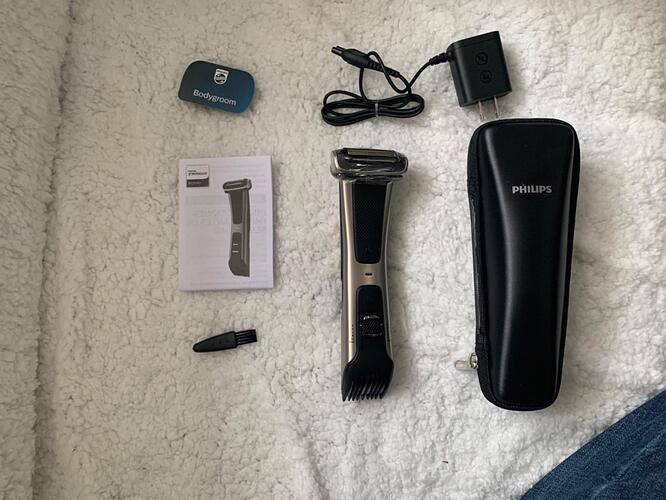 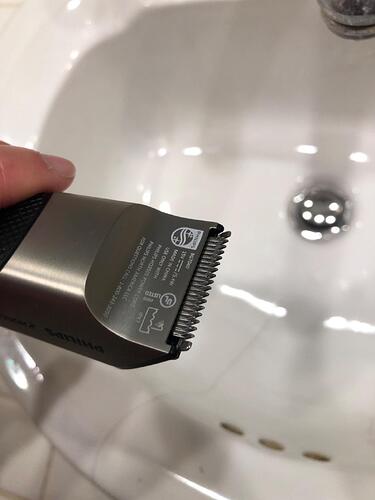 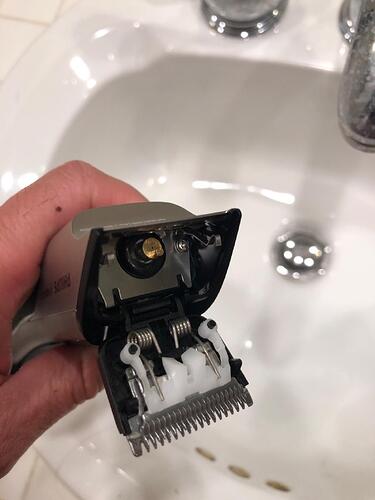 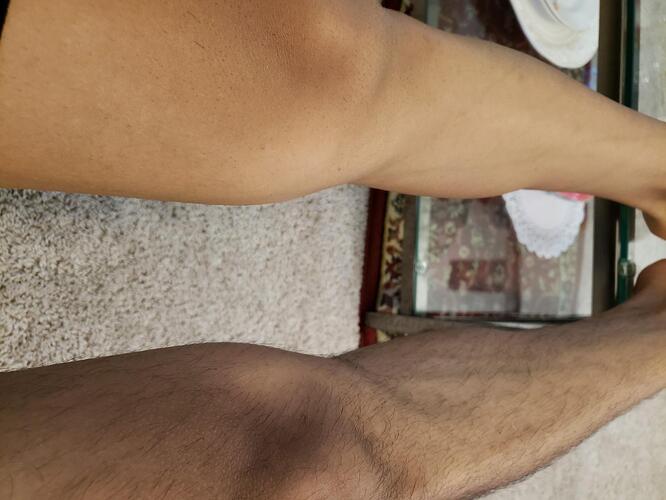 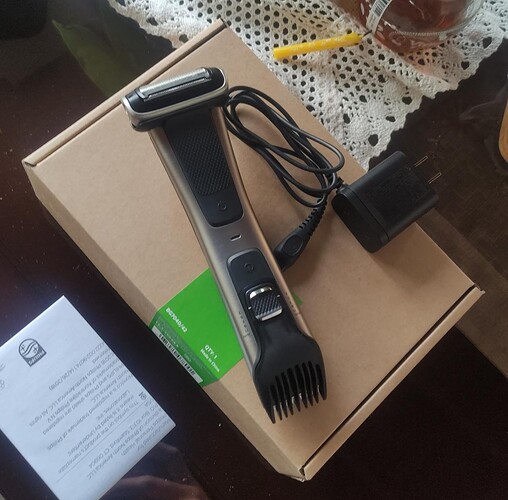 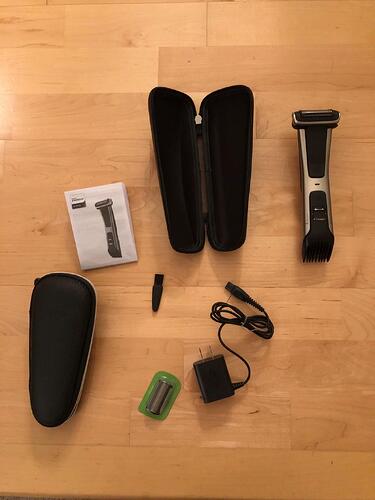 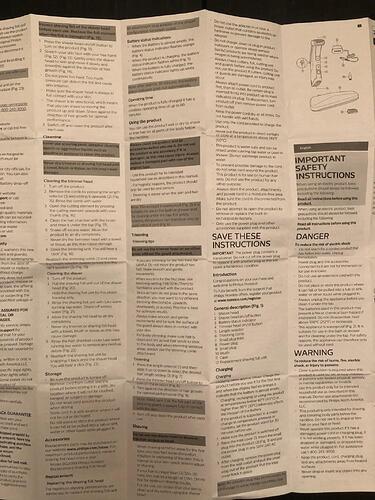 I’m talking about the Norelco Bodygroom Series 7000 from Phillips, the body shaver for down there and all the hair everywhere else. Now, I want to tell you guys that this is more for adult males before we get into this detailed review. There’ll be some sensitive talk, but I’ll keep it pretty PG. So you don’t have to worry.

Let’s get into this bad boy’s brand-new version of the Philips Norelco Bodygroom Series 7000. I started with Norelco about six or seven years ago in Seattle, and I’ve gone through three or four versions. And it’s just basically the same thing, except they enhanced it. The size is about the same, even though it feels slightly longer and looks a little longer because of the design.

The size is about the same, and I’ve had this for probably two or three years. I went looking for a new one. That’s where I started with the lawnmower and then Meridian.

Philips Norelco Bodygroom Series 7000 still has this beautiful design that protects you. I mean, you still need to pull down tight. You don’t need to go blindly down there ever, especially on the sack, but you need to pull it straight and get in there on the shaft.

But it’s really protective. I don’t get any nicks or poles, and I get down in front of a mirror because I’m not skinny, but I really get down in there. I like to go bald. I don’t want just to trim up. So, it really just gets everywhere.

And what I love is that they added the new head, which is basically like a two in one, it has two powers, but this is like a regular shaver. I could shave my beard with it and trim up my chest, hair, and back. It’s not soft to the touch, but it feels different from the other ones when you get down there.

And I can kind of like trim up, and I can run this safely around my bag and everything without any like tightness or pulling, just like get down in there because there are no exposed blades and it has several settings you can choose. So, the guard is built-in. In the old versions, you had to have these attachment guards that you had to keep up with and keep track of.

And so, you can, and you can take off the head completely to clean or change it. The shaver head just easily pops right back on. So that’s cool. And because it’s like two in one, you can just switch over easily and get closer to your chest or your arms. I use it on my arms, my hands. And, of course, the main area is like keeping yourself trimmed down there.

I still will use the Meridian trimmer because I really love it. It’s really small. It just feels right, and I can travel with it. I can quickly grab it and run across things on my arms or down there. The great thing about this is it’s better for trimming. They built this in, but the guard is pretty thick, and you can’t go any lower. So if you want to like, kind of like control, maybe even want to draw some lines or go bald, this Meridian trimmer is not capable of doing so.

So I’m glad I had both. To be honest with you, Philips Norelco Bodygroom Series 7000 is still my go-to. It looks really nice, feels super-premium, and it’s the same price. The Meridian feels really good, but the Norelco looks like it was a hundred dollars and feels like a hundred dollars. It just has the power thing back here in the back. It’s not a USB or anything. It’s just a standard plug. They haven’t switched over to more modern charging technology, but the battery lasts forever.

Both heads of Philips Norelco Bodygroom Series 7000 are waterproof. So, if you like to shave in the shower, you can do that. I prefer to shave dry; I think it’s a lot easier. You can do it anywhere. Of course, they’re wireless. You don’t want to use these plugged up. It would be best if you unplug them to use them. And they’re about the same sound, the Norelco a little louder.

The Meridian is definitely quieter, but who cares? Right. And this side is a little bit quantitative about this. And what I care about is whether I can get balled and feel comfortable and safe, not having nicks and bleeds. I get pretty close to everything and get down to nothing.

Both have the same kind of heads. The only difference between the Norelco and Meridian is that you now have this excellent, new addition. The new version of Philips Norelco Bodygroom Series 7000 has everything built-in, so you don’t have to have two things, one to trim and then one to get tight. The plug for the device is just a standard plug. It’s pretty long and durable.

My biggest problem is the hair around the ball area tied in when I shrink. And then, of course, it itches or burns when I’m in a public place. Many people say you shouldn’t be grooming your man. That’s for girls, but it’s more hygienic, and there’s a lot of evidence that you should actually queen. Maybe you don’t have to go bald.

Many people ask, why do you want to be like a little boy? I just liked the feeling, and I like being clean, and it definitely helps you stay clean and stay fresh. A lot of guys are doing it nowadays. It’s something that many guys are looking into; that is why so many companies are coming out with these razors specifically for that purpose. But I do want to tell you that, you know, other people notice that men want to groom, that men wish to products made for their bodies, and it’s becoming a thing, and you can check out my other stuff in the category, just for men.

Philips Norelco Bodygroom Series 7000 works really well, and I use this every 1 or 2 weeks. This is great for like your arm. If you want to like it, get really close, and you don’t, but this will work on your arms. I’ve shaved my chest, you know, it’s straightforward to like get in on your chest and stuff.

It feels so good down there or anywhere after trimming and shaving. It’s really versatile, so that I could turn it around. You can manoeuvre it quickly and get around, you know, get some of those loose, loose little stranglers and stuff like that.

So that’s it for me. I hope you liked this review. All in all, I highly recommend Philips Norelco Bodygroom Series 7000 for those looking for a great and working all over body shaver, especially for the intimate part.